To demonstrate that the LCLS is indeed coherent, a research team led by Ivan Vartanyants, of Germany's DESY synchrotron lab in Hamburg and the National Research Nuclear University in Moscow, used a form of the classic double-slit experiment. They shined the laser pulses through a pair of pinhole apertures and observed the usual pattern of bright and dark bands produced by coherent light. The x rays vaporize most samples, so for pinholes, the team used a silicon sheet containing hundreds of "single-use" pinhole pairs with different spacings and focused the beam onto a new pair after each beam pulse.

The team observed very high contrast between the brightest and darkest regions of the pattern — high "visibility" — for small aperture separations. As the aperture spacing increased, the pattern received contributions from more widely separated photons in the beam, and without perfect coherence, the visibility decreased. By measuring this decrease, the team found the coherence length — the distance over which the photons stay coherent. Their result was 16.8 microns, comparable to the width of the beam.

The researchers also measured the degree to which the beam is monochromatic, which is equivalent to the coherence time. For large pinhole separations, they examined the visibility at the edge of the pattern, where the light travel distance from the two pinholes has the maximum difference, and any wavelength discrepancies would show up most clearly. They measured a coherence time of 0.55 femtoseconds, which means that the pulse was effectively the same color and intensity for that long, equivalent to a distance of about 150 nanometers along the beam direction. So a 150-nanometer-deep sample can be illuminated with coherent light all at once. Log in Your login is case sensitive I have forgotten my password close MacGregor Campbell, consultant Surely if flying saucers existed, they would float around like the disc in this video. The demonstration by physicist Boaz Almog from Tel Aviv University, Israel, at the Association of Science-Technology Centers (ASTC) Annual Conference in Baltimore, Maryland, earlier this week illustrates how a superconducting plate can be fixed in 3D space while levitating above a track of permanent magnets. But this isn't simply magnetic repulsion: the disc can also stay suspended upside down when the magnets are flipped over. // Дальше — www.newscientist.com 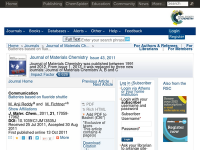 In search of new concepts to build batteries with high energy densities, electrochemical cells based on metal fluorides may be promising. Herein, we report the demonstration of secondary battery cells based on fluoride shuttle. In fluoride ion batteries, fluoride anion acts as charge transfer ion between a m // pubs.rsc.org

The Karlsruhe Institute of Technology (KIT) was founded by a merger of Forschungszentrum Karlsruhe and Universität Karlsruhe.