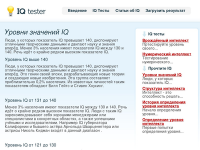 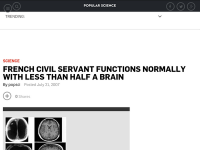 French Civil Servant Functions Normally With Less Than Half a Brain

The man's brain (left; the black areas are fluid buildups) compared to a normal brain scan (right). Via NewScientist Jokes about tax collectors and intelligence aside, a French civil servant has lived a largely normal life with only a fraction of his brain intact, the medical journal Lancet recently reported. When he reported to his doctor complaining of weakness in his left leg, a CT scan found that fluid buildup over the years had pushed the mans gray matter to the outer limits of his skull, leaving a large black hole in his head scans. The 44-year-old man is married with two children. While his IQ of 75 is below average, he is not considered mentally disabled. Whats fascinating to scientists is that the man has functioned as well as he has with so little actual brain tissue. Research in recent years has shown the remarkable plasticity of the brain, but this is among the most extreme examples of the brain can easily adapt to gradual change in its physical makeup. The unintended neuroscience experiment began with the childhood condition known as hydrocephalus, where cerebrospinal over-fills the brain cavities, increasing cranial pressure. Doctors initially installed a shunt in the mans head to drain the fluid, although the shunt was removed when he was 14. Fascinating stuff. —Jeremy Hsu Via NewScientist // www.popsci.com